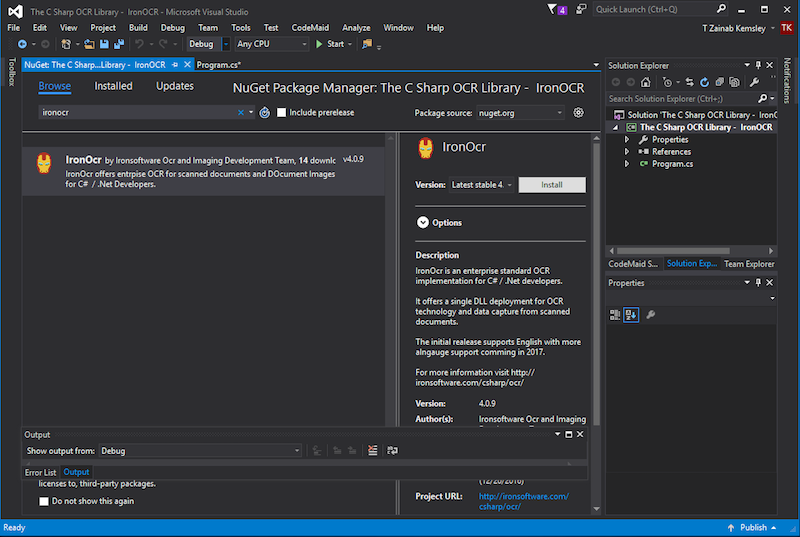 The C# OCR Library by the ‘Iron OCR software Development Team’ is a software package for C# programmers, adding optical character recognition to desktop and web applications as an alternative to tesseract

Iron OCR can be used to scan documents or text as image assets into plain indexable text which can be read by computer applications and indexed by database.

C# OCR Library(or IronOcr for short) is aimed at C# and .net software development professionals of all levels who need to add scan or image to text functionality to their applications.

The C# OCR Library features include:
1 – ‘Image to Text’ -rendering graphical representations of characters to strings of data
2 – Built-in OCR dictionaries and pre-trained machine learning models for languages including English.
3 – Managed installation into the Microsoft Visual Studio software development environment using the NuGet package manager (https://www.nuget.org/packages/IronOcr/)
4 – A straightforward API allowing OCR to be added to an application in three lines of code

Licensing options include free development licensing for application build and testing, in addition to commercial licenses in three categories: personal for freelancers and start-ups, organisation licenses for internal development and business systems, and enterprise licences for software development contracts as well as OEM software developers.Open source examples with source code can also be found on the website and on http://github.com.

Optical character recognition software works by simulating human vision by the use of comparing characters found in images to existing characters found in typefaces and in handwriting which is typically trained into machine learning models (such as decision trees and hidden Markov chains)to allow for this highly complicated task to be achieved in real-time.

The C# OCR Library was developed by the iron software OCR development team and can be found online at http://ironsoftware.com/csharp/ocr/