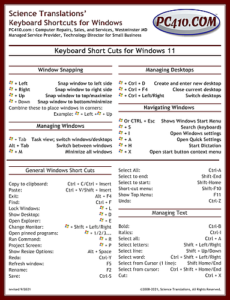 Windows 11 has launched. Here’s a free Windows 11 keyboard reference chart, from our related site, PC410.com
The download is free, no strings.

Three biggest concerns are to do with cost, complexity and risk while 83 percent say humans are still the weakest link

The majority of small businesses in the U.S. (82 percent) believe the Internet of Things (IoT) will bring fresh opportunities for their business, according to a new study released today by AVG Technologies N.V. (NYSE: AVG), the online security company for devices, data and people. While more than 2 out of 5 (46 percent) agreed the IoT will mean more time spent dealing with security hacks, this was more than offset by the 83 percent of respondents who said that human error would continue to give them more concern than smart devices.

“The ‘Internet of Things’ is one of those nebulous bits of jargon invented by the IT industry and many people I meet are confused as to what it actually means,” said Mike Foreman, AVG’s general manager, SMB. “With this study we wanted to show how the IoT can bring opportunity to small businesses.”

“Another aim of the report was to highlight key areas of difference between countries,” he continued. “For example, it was significant that U.S. respondents were the only ones to put government monitoring ahead of lack of demand when it came to factors holding back IoT adoption.”

The study*, in which more than 2,000 small businesses in the U.S., Canada, the UK and Australia were interviewed, also showed that there is much more to do to help them understand what IoT actually means (only 58 percent understood IoT to mean a network of connected devices that are able to communicate with one another).

Asked to list their concerns about Internet-connected devices, small businesses named their top three as:

“From the research we can see that while small businesses share great enthusiasm for the IoT, their concerns over cost, complexity and risk show they also have some serious reservations,” continued Mike Foreman. “The pent up demand for more backup, security, support and other services that we see in the study gives us a positive indication of how the service provider business model will develop over the next 2-3 years.”

A summary of the other main findings in the study were:

* AVG commissioned independent technology market research specialist Vanson Bourne to undertake this research. 2000 interviews were carried out during April 2014 with IT decision-makers of organizations with of 1 – 500 employees. Interviews were performed across four countries: UK, US, Canada and Australia. Respondents to this research came from a range of industry sectors, with only the public sector excluded.

Interviews were conducted online using a rigorous multi-level screening process to ensure that only suitably qualified candidates were given the opportunity to participate.