If you’re aiming to improve your English speaking, listening and writing skills, regardless of its for your own pleasure or for English-accreditation exams such as Cambridge, TOEFL, or IELTS, having a good application to rely on can make all the difference.

English2Cards is a smart solution for learning English without necessarily requiring an active Internet connection. Before anything else, its important to note that the application aims to improve your English listening, speaking, and writing skills by relying on various so-called Card Sets: http://www.english2cards.com/cardsets

These Card Sets can be downloaded from the app’s official website and include:

A. English Core Vocabularies: the most important and commonly used words in English with translation, pronunciation, examples and pictures for each word. by learning these words you will be able to understand about 90% of everyday English conversations.
B. Various sets organized in sections for: Listening, Speaking, Audio Lessons, and Video Lessons.

English2Cards is a useful program dedicated to all those who want to improve their English skills with many interesting features such as:

1. It’s a deep learning system, the educational cards will be reviewed repeatedly at different times so that you can remember the new words and phrases that you have learned and be able to use them in real conversations easily and without thinking.
2. During learning, you can remember any forgotten word in the text and also get the translation, pronunciation and examples of the new words and review them later.
4. Watching the learning videos with interactive subtitles text, which allows you to remember and search for words during watching.
5. It provides you with the option of creating voice recordings inside cards during the learning process. This helps you improve pronunciation as well as build self-confidence.

In addition to many other features to make learning English easier and more fun. 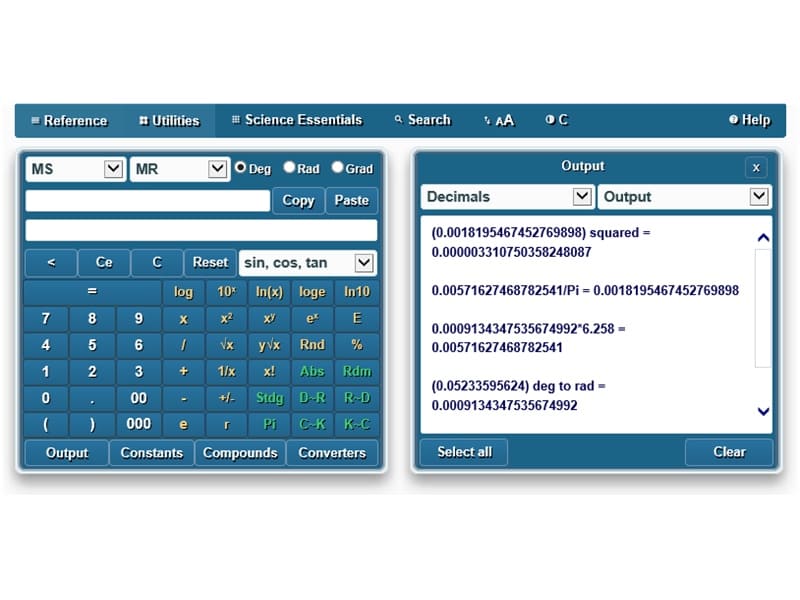 This highly functional Scientific Calculator is a must for science students. The main calculator has over 40 functions while being very easy to operate. The formula of a compound can be entered into the calculator and it will determine the molecular mass. The calculator output can be recorded in a electronic note pad in decimals, scientific notation or engineering notation. Included are an extensive number of science tools such as triangle calculators, vector calculators, shape calculators, kinematic calculators, half-life calculators, maths calculators, gas laws calculators, statistical calculators, molar mass calculators, pH calculators and one of the most extensive measurement converters available. Over 100 constants can be called to list their numerical value and uncertainty value. Included are over 500 formulas and equations for physics, chemistry, maths, trigonometry and statistics. It lists over 400 science, maths and statistics symbols. It lists the name, formula and molecular weight of over 3000 compounds. It contains many other science data reference systems such as SI units, derived quantities, maths laws, atomic structures, ions, homologous series, frequencies, shapes, angle types, material properties, acids, bases, conjugate pairs, ecological groups and biomes. The system contains extensive lists of piping and process symbols and electrical symbols, and it has interactive flowcharts for mechanical and electrical units. It contains 9 colour coded periodic tables and lists over 30 types of property data for each element. It contains full electron configuration of the elements, radiation types and quantum numbers. A glossary system contains the phonetic alphabet, science and medical fields, and acronyms and abbreviations used in science. The calculator also contains an event timer, yearly calendar and world times system. A help system explains operation, and a search system can be used to quickly locate data reference systems and science tools.
Type: Freeware
Cost: $0
Size: 197.97 MB
Release date: Jan 01 2019
Platform: Win2000,WinXP,Win7 x32,Win7 x64,Windows 8,Windows 10,WinServer,WinOther,WinVista,WinVista x64
Publisher’s Site:  http://elearningincorporated.com/
Publisher’s Product Page:  https://datamasks.com/maskit-editor-data-masking-tool/
Country: United States of America

Maskit is an advanced image editing and data masking tool that uses Edge Technology to save you hours of wasted image editing time. This tool can be used for the data masking, and redaction of training content, therefore it is a training-development tool for both users and experts who want to create e-Learning content. Users can take advantage of the OCR text recognition, OCR text extraction and masking functionality to redact, mask and make data confidential while they are developing their training materials. Additionally, Maskit is compatible with other tools such as Adobe Captivate or Oracle UPK.

Maskit is aimed at professionals looking to mask confidential data found in many of the slides or images that they are working with to produce published documents. Typically, this is a challenge for the content manager since there are lots of documents and the masking needs to be done on many images. Users also want to replace the data as the documents are used for company publications. Since blacking out data is not acceptable, Maskit is a perfect alternative, particularly as it has a built-in data link to change data as required.

Maskit is designed by e-Learning specialists, training consultants and documentation specialists who have been creating documents and support materials for users for many years. This software product is easy to use and developed with the user in mind. We developed data-masking functionality since many of our customers were using sensitive data in their training delivery. They were doing so because it was not possible to create demo data due to the complexity of some of the processes, especially human resources data. Most companies in the training business just need to cover the data or better still replace it with fictitious data, while other companies want to hide data. The best thing about Maskit is that it can do both.